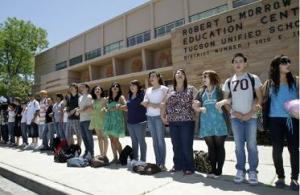 If you are like most youth, “politics” is something that happens only once every four years when there is a George W. Bush or Barack Obama at the top of the ticket. Besides that, “politics” is that thing that only the most hardcore of partisans pay attention to – something left to the folks who take the time to match their pins with their shirts. You are not THOSE people; you are simply you. Right?

As Aristotle famously said, we are by our very nature “political animals.” As long as there is wrong in the world, our hearts will yearn for justice and it will be up to us to answer the call. It is who we are and it cannot be quelled. There is no such thing as being “nonpolitical”; there is only passion unrealized. There is no such thing as the quadrennial citizen; there is only the neglect of one’s civic duty.

And while it may be easy to believe that “politics” is just some abstract idea best left to “THOSE people” and that just casting a ballot forgives all sins, we must accept that we are responsible not only for what we do but for what we have the power to prevent. A vote is powerful, but to truly be the change one wishes to see in the world is to be divine.

Just as there was a stark contrast in 2008 between the two directions our country could move – one guided by the politics of Fear and the other by Hope – 2010 will prove to be no different. The moment President Obama took office the Republican Party decided that it would do everything it could to stall any and all of the President’s proposals to the point that even things like guaranteeing that the poor have access to health care took nearly a year to get done!

Say what we will about Glenn Beck and Sarah Palin but the truth is that unless we are willing to stand up and speak truth to power, the Tea Party Movement will continue to gain steam. And if we thought the “Party of No” was hard to work with, what are we to expect from the “Party of HELL No”? Against it all we have moved far over the last two years – preventing the Second Great Depression, regulating Wall Street and insuring the uninsured – so let’s keep moving forward. Let’s change the world.

Help us in this cause.

3 thoughts on “The Common Man Partisan”