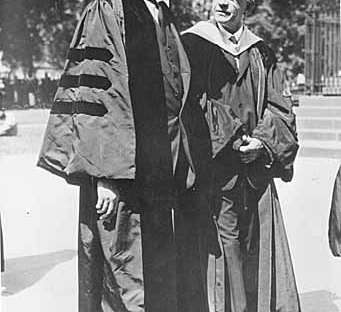 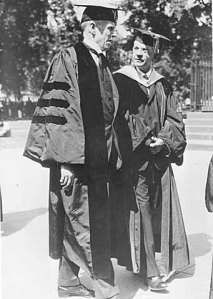 Although he’d held workshops and lectures across the country, in the fall of 1940, Lewis took his first step into academia by accepting a nonpaying position at the University of Wisconsin. Attracted to the city of Madison, he enjoyed teaching and so, once a week for two hours, he’d pace the room listing everything he’d ever learned about writing. One student, theater critic Frances Benn Hall, recorded one of Lewis’ lectures:

When you write don’t worry about whether or not it’ll sell …. Don’t want success at twenty-two. If you want fame, be a prize fighter or a movie star. If you write, write because you must write. Because you can’t help it. Write what you believe, what you know, what moves you. And always write the best you can. Be self-proud. You can fool the critics but never yourself. Remember you’re competing with the best that’s ever been written. Try to be better than the best. There’s no limit for you and there can be no writing but great writing. Possess a divine egotism. . . . And never forget that you’re competing with Shakespeare (451).

Lewis’ time in Madison was short as, after six classes, he abruptly returned to New York, telling his students, “I’ve taught you all I know. From here on in, all would be repetition” (452).

Two years later, returning to Minnesota to gather material for his next novel (Gideon Planish, 1943), Lewis joined the University of Minnesota where he taught another writing course. Though there for only one semester, Lewis was uncomfortable socializing with his peers:

The novelist Robert Penn Warren was on the faculty there, but Lewis was wary of him because he was friendly with the critics Allen Tate and John Peale Bishop, also teaching at the university, whom Lewis felt looked down on him — which they did (468).

Presumably Lewis taught his course very similarly to that at Wisconsin, but when the semester ended he left with these last words for his students: “In writing as in life, righteousness is permissible” (469).

That’s advice that could be used today.