I’ve posted before about the Great War, including the anniversary of the assassination of Archduke Ferdinand and a sampling of political cartoons from the war’s first year. Recently, while searching the newspaper archives for (and failing to find) a certain Russian-Anarchist-themed comic strip, I discovered the following photograph. Titled WAR, it depicts a Belgian woman—grief-stricken, the features of her face lost in dark shadows. 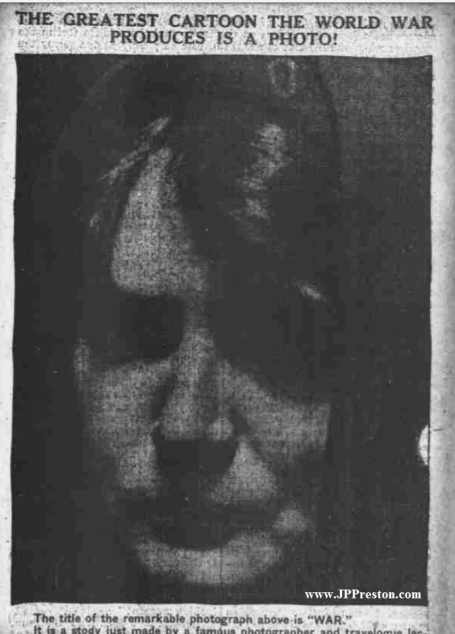 This photo moved me, and so when I tried to look for more of Lawrence Grant’s work I discovered he wasn’t a professional photographer at all but instead an English-born actor and lecturer. He was also a pacifist, so much so that someone from the German Kaiser’s inner circle once offered Grant a role portraying him on stage—something Grant immediately turned down when the war started.[i] Instead, he carried his camera around Europe, producing a series of “ten minute travellettes illustrated by pictures in color.”[ii] One of these photos was WAR.

The photograph’s caption in The Day Book reads:

[. . .] This study was made in the war arena and typifies Mr. Grant’s impressions, he says, of the great war as it affected Belgium.

“To me,” he says, “ALL of the horrors of war are summed up in this one woman’s face. She shows all the terror that the soldiers feel in the trenches when shells burst about them, just as plainly as the terror the women feel left alone to meet the oncoming depredations of a devastating army.

“If HER face does not stop war, not all the sights of Belgium would stop war, for she IS Belgium–SHE IS WAR!”[iii]

As the war spread, Grant maintained his pacifism. Once he delivered a letter from the President of Andorra to U.S. President Woodrow Wilson congratulating him on the U.S.’s neutrality and offering “to lend [Andorra’s] feeble voice toward a peace conference.” To the newspapers, Grant praised the tiny country’s virtues (including—in 1915!—its free healthcare), making special note of the President’s salary. (This is worth quoting only because it happens to be my own bottom line in most salary negotiations):

“Nobody is poor and nobody is rich. The President’s salary is two cheeses, two capons and a ham from each of the six little counties or states each year He is elected by the house of Representatives [. . .].”[iv] 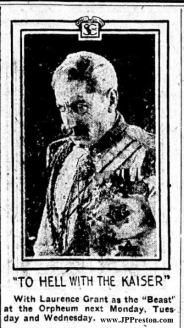 Grant’s lectures ceased as he invested himself in his acting career, writing plays that, while still pacifistic, advocated for “patriotic preparedness.”[v] Four years into the war, he also at last capitalized on his “striking physical likeness” to the German Kaiser and developed an impression that led to his being cast in the silent film To Hell with the Kaiser! (1918). This he promoted “startl[ing] New Yorkers by walking down Broadway in the make-up of the Kaiser, soliciting donations for the Red Cross.”[vi] Though he later revived his lecture tours (working with film instead of photography), he made his name in Hollywood—where, according to his IMDB page, Grant garnered 101 film credits to his name before he died in 1952.

It’s amazing what one uncovers in archives. What begins with the discovery of a single photograph unravels into a politics, a profession, an entire life. As the poet Anne Waldman once told me, “archive is memory,” and WAR reminds us how many war photographers have made this same refrain: “If HER face does not stop war, not all the sights of [Europe, Korea, Vietnam, Iraq, Afghanistan] would stop war.”

[ii] Strand Roof Sunday Concert, The Sun, Jan. 31, 1915, at 13. The advertisement for these “smoking concerts” add: “[A]t 4 and 8:30 P.M. the guests will lounge in the easy chairs or move about as they choose during a varied concert of music and readings. The men will be allowed to smoke. There will be no dancing.”

[vi] Here and There among the Favorites, Harrisburg Telegraph, Mar. 18, 1916, at 6; New Feature Films to Be Seen This Week on Screen, New York Tribune, June 30, 1918, at 4. A printed advertisement lays out “A Few Facts About This Particular Feature,” one of which is it “[s]hows how we are fighting to win the war in the air, and is, therefore, in full accord with the sentiments of the United States Government.” To Hell with the Kaiser!, Advertisement, The Pensacola Journal, Sept. 30, 1918, at 6.

One thought on ““The Greatest Cartoon the World War Produces is a Photo!””