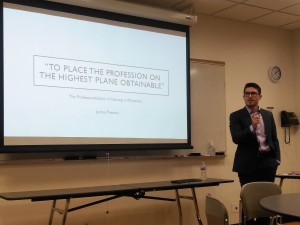 Last year the Minnesota Historical Society awarded me a 2017 Legacy Research Fellowship. This supported a project I am doing on how early-20th century nurses organized what later became the Minnesota Nurses Association (MNA). For those unfamiliar with the MNA, not only is it a major political force, but it is responsible for both elevating the profession and improving the quality of care for hundreds of thousands of patients.

What attracted me to the history of nursing in Minnesota is that though much is written about particular hospitals and doctors, the contributions of our state’s nurses are largely unexplored. This is despite the fact it was Minnesota nurses who created the nation’s first centralized nursing registry (1898) and who, through their advocacy, passed the state’s first nursing regulations and licensing requirements (1907). Both of these were critical milestones in the development of Minnesota’s health care system.

To fill this scholarship gap in the state’s history of medicine, I used the Gale Family Library collections. Specifically, I focused on the conditions that led nurses to form groups like the Minnesota State Graduate Nurses’ Association (MSGNA), the arguments they made for doing so, and how its programs (e.g. the registry) improved both patient care and the economic well-being of nurses. Although this will eventually become an article I submit to Minnesota History, in April 2018, I published on MNopedia a condensed summary of my work as “The Professionalization of Nursing in Minnesota, 1898-1920.” I encourage you to read the whole entry, but here is an excerpt: 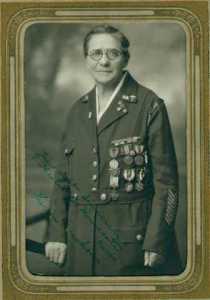 In St. Paul in August 1898, Theresa Ericksen and eight of her fellow nurses founded the United States’ first centralized nurse registry. “Realizing that in union is strength,” these nurses called themselves the Ramsey County Graduate Nurses’ Association (RCGNA). By their “mutual help and protection,” they aspired “to advance the standing and best interests of graduates […] and to place the profession of nursing on the highest plane obtainable.”

Because hospitals were too small to accommodate full-time nursing staff, nurses represented themselves and advertised their services through the few means available. These included word of mouth, newspaper ads, and free drug store registries with the nurses’ contact information and areas of expertise. While some hospital training schools had their own registries for alumnae, private duty nurses relied upon these free registries.

This decentralized approach to connecting nurses to patients was problematic. Not only did each school have its own practices and standards, but the free registries were open to anyone. Nurses of all skill levels were mixed together, placing side-by-side the field’s capable Theresa Ericksens and less responsible practitioners. In contrast, the RCGNA’s centralized registry was selective in its membership and thus served as a kind of credentialing service.

You can read the rest here.