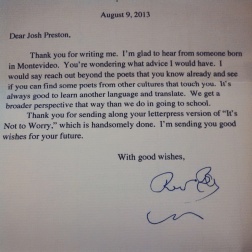 A few years ago I corresponded with poet Robert Bly, and I asked him what advice he had for young writers. In his late-eighties and ill, I did not expect an answer, and so I was surprised (even more: nervous) when a few weeks later a familiar cream-colored envelope arrived. Opening it, he’d written,

“You’re wondering what advice I would have. I would say reach out beyond the poets that you know already and see if you can find some poets from other cultures that touch you. It’s always good to learn another language and translate. We get a broader perspective that way than we do in going to school.” (August 9, 2013)

Now, the truth is that even though we ask for advice, we don’t really want it, especially if it means changing what we’re used to. (The only advice we’re really open to is that which least inconveniences us). So, reading his letter, I became despondent, wishing I’d taken my Spanish courses more seriously. But even as I tried to reason my way out, I knew encouraging young poets to translate was not unconventional. In fact, I recalled an interview with W.S. Merwin in which he talks about meeting Ezra Pound, who offered the following:

“If you want to be a poet, you have to take it seriously. You have to work on it the way you work on anything else, and you have to do it every day.” He said, “You should write about 75 lines a day,” (Pound was great at laying down the law on how to do anything), “but you don’t have anything to write 75 lines about a day. You don’t really have anything to write about. At the age of 18 you think you do, but you don’t.

“The way to do it is to learn a language and translate it — that way you can practice and find out what you can do with your language – your language. You can learn a foreign language, but translation is a way of learning your own language.”

Having spent years staring at the page, worried about my silence, Pound’s logic made sense to me. To be a writer, one has to write. Too often artists expect manuscripts to fall from the Heavens without realizing that writing, like anything else, is a craft. Writers are wordsmiths. To draw an analogy: it’d be absurd to expect a blacksmith to make a broadsword without first making a pile of broken shards and twisted metal. (As evidence: In front of me is a shelf full of notebooks filled with scrap and shavings).

So for my first project, I translated two poems by Sinclair Lewis, originally written in German while a college studen. With no choice but to start from the beginning, I relied heavily on a German-English dictionary. As I began to uncover certain phrases and thoughts, line-by-line I struggled to decipher what Lewis was actually saying — and when I was stuck, I wasn’t afraid to reach out to native-speakers and ask for help. In the end, the two pieces took just as many months and were published in the Sinclair Lewis Society Newsletter.

Since Christmas I’ve worked on more translations, this time of poet Julius Baumann’s Fra Vidda (1915) and the short stories of Danish writer Ernesto Dalgas (1871-1899). Engaging these more seriously than I did Lewis’ work, they’ve made me more conscious of the philosophy of translation: It’s led me to ask, What does it mean to translate a poem? and Why do we do it? How one answers these will necessarily guide what appears on the page, which is why it is possible for many versions of a poem to exist, each honest and true yet incomplete.

I’m too new at this to have a fully-developed ethic (let alone whole philosophy), but I will note the first lessons I learned: art is not literal and transliteration is murder. Merely substituting each word for its English equivalent is a butchering of the body that allows the spirit to escape. To put it differently, when studying a person’s features, one finds that a human face is made of movement, emotion; it’s these same things that make a poem. In my little time translating, that is the analogy that’s guided me. That’s what distinguishes the final draft from my first.

Although it’s been a year and a half since I received Bly’s letter, I’ve tried my best to follow his advice. Some of my translations are better than others, but the process has been its own reward — I’ve “broadened my perspective” and “learned my language” in ways I otherwise wouldn’t have. It’s not easy, but then again why should it be? Like anything else it’s work, but it’s good work.

It’s the kind of work Bly, Merwin, and Pound would recommend.

One thought on “Writing advice from Bly, Merwin, and Pound: “It’s always good to learn another language and translate””