I’ve blogged before about the writing advice Robert Bly once gave me, and since then, I’ve translated pieces by Norwegian poet Julius B. Baumann (1869-1923; here) and Danish writer Ernesto Dalgas (1871-1899). Like Baumann, even though Dalgas is well-recognized in the canon of his country’s literature, none of his work exists in English. So, this is my attempt to fix that. (Let me know what you think!)

Both of these first appeared on my Instagram page, where I tend to accompany writing with my own drawings/illustrations. The story “Milkwort” is from Chronicles and Fairytales (1896), and the “Life and Death” excerpt is from Poems and Drama (1904).

There once were three sisters: one dressed in red, another in white, and the third in blue. Each wore a petal gown of a foreign cut, obtained from a distant land. They were alone in this country, and the native flowers did not like them.

Each was to be married in the distant lands, but as time passed, their grooms did not show.

Now one sister has traded her gown for hallowed robes of white, ringing evening bells for the dead. The sister in blue wears violet silk, an old maid moved to write verse about men’s betrayals. But the sister in red — she whispers to herself “I am still betrothed” and gazes out toward the horizon where the sun rises. 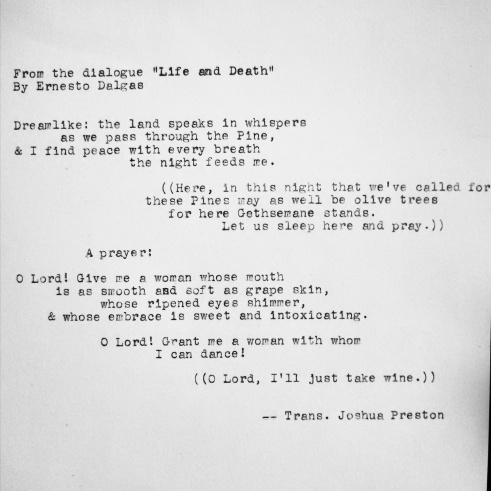 From the dialogue “Life and Death”
By Ernesto Dalgas (trans. Joshua Preston)

Dreamlike: the land speaks in whispers
as we pass through the Pine,
& I find peace with ever breath
the night feeds me.

((Here, in this night that we’ve called for
these Pines may as well be olive trees
for here Gethsemane stands.
Let us sleep here and pray.))

O Lord! Give me a woman whose mouth
is as smooth and soft as grape skin,
whose ripened eyes shimmer,
& whose embrace is sweet and intoxicating.

O Lord! Grant me a woman with whom
I can dance!